Ayr 16-14 Bristol
Ayr brought some seasonal cheer to Millbrae with a last gasp victory over Bristol in a muddy British and Irish Cup tie on Saturday afternoon. After last week’s narrow loss to Munster, the men in pink and black were determined to end 2011 on a high.
The first twenty minutes of Ayr’s fourth B&I Cup game were hampered by the slippery conditions. Although it was dry overhead, it was soggy underfoot, and the best efforts of those tending the Millbrae turf were spoiled as the two teams doggedly fought for territory and possession.
The experienced Bristol side spent much of the first quarter encamped in Ayr’s half, solidly working their way towards the line with a series of driving mauls. But the home team proved tenacious in defence and repelled any Bristol attacks.
Eleven minutes in saw two yellow cards handed out by the referee. Ayr second row Scott Sutherland and Bristol prop Darren Crompton found themselves in the sin bin for ten minutes. With the forwards down to seven men aside, the scrums became even messier in the increasingly churned-up pitch.
Both teams struggled with handling errors, which possibly led to the match’s first points opportunity at twenty-three minutes. Bristol were penalised for holding on just inside their own half. Robbie Fergusson easily slotted over the kick, making it 3-0 to the home side.
With Sutherland and Crompton back on the park, the scrums continued to dominate the first half. Referee Jason Bessant continually stopped time to talk to the front rows, but to no avail. Bristol wheeled the scrum, giving Ayr an opportunity they couldn’t capitalise on.
Bristol had all the territory, although possession was evenly matched. After a failed attempt at a cross-field kick, it seemed the men from the West Country would go into the dressing room without any points. The crowd was under the impression that time was up, and it appeared that Ayr’s Calum Forrester had kicked the ball to touch for half-time. But the referee brought them back from yet another scrum in the quagmire of Ayr’s half, which led to a quick try for Bristol’s fullback Sean Marsden. Mark Davies successfully converted, bringing the scoreboard to 3-7 at the break.
Ayr took to the field with renewed purpose in the second half. Within five minutes, Fergusson had another successful shot at goal to bring the score to 6-7. Besides a scything run from Ayr’s inside centre Mark Stewart, the game continued in much the same vein as the first half. Bristol also had an opportunity at goal, but replacement Jack Gadd was unable to get any distance with his kick. It was gathered by Ayr and scrum-half Murray McConnell pinned his ears back but was closed down by strong defence from Bristol.
Ayr applied the pressure further, but Bristol’s experience told when their number eight Dan Montagu crossed the line for the visitors’ second try. Gadd’s conversion took the score to 6-14 with twenty minutes to go.
The home team didn’t fade though, with the backs showing some good handling and running. Fergusson missed a penalty kick, but Ayr pressed on. A brilliant charge up the wing from Cameron Taylor took Ayr into Bristol’s half. Forwards and backs combined to bundle Mark Stewart over the line for Ayr’s only try of the match. Replacement Sylvain Diez converted with seven minutes to go, making the score 13-14.
There was more drama to come, as the referee reached for the red card with three minutes remaining. Already sin-binned, Bristol’s Darren Crompton’s second yellow became a red. With the ball teed up practically on the left touchline, Diez lined up for the penalty kick. The crowd held its breath as the Frenchman bisected the posts to put Ayr in front for the first time in the second half. After a line-out and scrum, Ayr gladly booted the ball onto the stand roof, which was raised by the ecstatic supporters. The final score was Ayr 16 Bristol 14. – Eléna Hogarth

British and Irish Cup business continues this week as Ayr take on Bristol at Millbrae in the final pool match. Make sure you get down for the game. 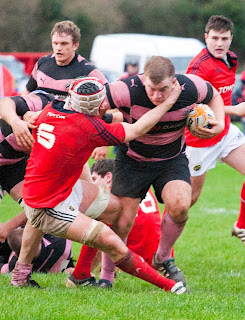 Moray Low on the rampage for Ayr against Munster at Tralee.
Posted by Ayr Rugby Club at 20:57 No comments:

Ayr scrum half Murray McConnell is on the bench for Glasgow Warriors this Sunday when they take on Newport Gwent Dragons at Rodney Parade.

Gordon Reid is also on the bench and that other Ayr favourite, Johnnie Beattie, makes a welcome return at No. 8.

Good luck boys. The game is live on BBC Alba.
Posted by Ayr Rugby Club at 00:49 No comments: