It's just over a month until the season begins in earnest, and we're pleased to welcome players new and returning to Millbrae, and sad to say goodbye to three 1st XV regulars.

Joining us from GHA is back row forward Grant Neilson, whilst tight head prop Matthew Wainwright will turn out in a pink and black shirt this year after moving to the area from Leeds, and Scotland U18s and Dollar Academy scrum-half Harry Warr becomes an Ayr man.

Returning to Ayrshire rugby is utility back Jamie Bova, who has spent some time in Australia. Youngsters Stafford McDowall and Aaron Tait haven't been quite so far away; both have been at school in Edinburgh and represented Scotland U18s and U19s respectively.

We look forward to seeing them all in action and we know the Millbrae faithful will make them feel right at home in Alloway. 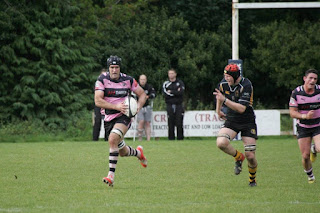 The fans have already said farewell to Andrew Dunlop, Robbie Fergusson and Javan Sebastian, and there are three more to add to the list of departures.

After, in his own words, 'five wonderful seasons' with Ayr, Graham Fisken has decided to retire. The back row player had a deceptive turn of pace that often caught the defence napping, and it wasn't an unusual sight to see him sprinting for the try-line. He memorably delighted the commentating John Beattie at the 2013 Melrose 7s, who was impressed by his speed and skill.

We wish Graham all the best as he moves to Edinburgh to pursue his career in law.

Heading east too is Fergus Scott, who returns to his home club of Currie. The Glasgow Warriors hooker made many impressive appearances in a pink and black shirt, and was named Ayr's 1st XV young player of the year in 2013/14. 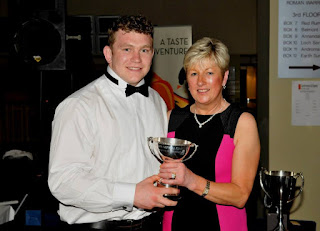 We're sure to see Fergus back at Millbrae, albeit in a different coloured shirt.

Leaving after a year at Ayr is winger Haddon McPherson, who has moved to Canada. The whippet-like back scored four tries in his solitary season at Millbrae, delighting the fans with his fancy footwork and giving the opposition a headache with his slippery yet stylish play. 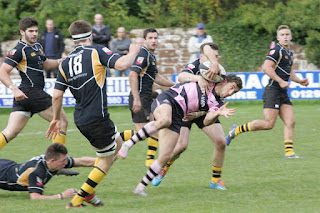 We thank Graham, Fergus and Haddon for all their efforts on and off the pitch.

Photos by Jim Gemmell and George McMillan.
Posted by Ayr Rugby Club at 14:51 No comments:

With Ayr and Ayr Ladies beginning their preparations for 2016/17, some warm-up fixtures will be played in August.

Ayr Ladies are now in the BT Premier League after a wonderful league campaign last season and will play Greenock on Friday 26th August.

Meanwhile, ahead of the BT Premiership kicking off on Saturday 27th August, Ayr will have three pre-season games, all away.

On Saturday 6th August, they play BT National 1 side GHA, before heading to the north-east of England to take on two SSE National League Division 1 teams on consecutive Saturdays. They face Blaydon on 13th August and Darlington Mowden Park on 20th August.

On Saturday 13th August, Ayr 2nd XV/Millbrae RFC will play a tri-fixture with Greenock and Kilmarnock at Greenock.