Ayr's first home game of the new season sees them take on Dundee HSFP at Millbrae on Saturday at 3pm.  Following their excellent opening win of the season against Boroughmuir last weekend, Ayr hope to give their loyal supporters something to get their teeth into.

The victory over Boroughmuir proved to be a rather bruising encounter for several of the players, with Dean Kelbrick and Finn Russell picking up injuries and missing this week's encounter.  They are replaced by Richard Dalgleish and Sylvain Diez respectively.  Ross Curle also misses out due to his red card.

There are changes in the forwards, with Colin White returning to action following his recovery from a virus.  On the bench, Denford Mutamangira is back from international duty with Zimbabwe, and Nick Campbell has been released by Glasgow Warriors for the game.

"Our games against Dundee are always physical encounters, and I don't expect this game to be any less so," he mused.  "They have a very strong pack and are always very ambitious behind the scrum."

"This is our first home game," Murray continued, "and if we can play some of the rugby we played last week, we will give the fans something to cheer about."

Gossman brothers in The Herald

Two of Ayr's new signings, Craig and Kerr Gossman, talk to the Herald's Neil Drysdale in today's online and print editions about this weekend's game with Dundee and the rest of the season.

You can read the full article here.
Posted by Ayr Rugby Club at 13:29 No comments:

Last night's drizzly conditions didn't stop a huge number of rugby fans flocking to Millbrae to watch Glasgow Warriors take on Exeter Chiefs in a pre-season friendly.  Everyone at Ayr RFC was delighted to host the Warriors' last warm-up match before they kick-off their RaboDirect Pro12 campaign, and to welcome the Chiefs all the way from south-west England.

Before kick-off, there was a touching minute's silence in memory of Scotland under-20 player Mitchell Todd, who tragically passed away last week.

It was a low-scoring first half, largely thanks to Glasgow's defensive efforts, as Exeter made for the line on several occasions.  Penalties were also missed by the Chiefs' stand-off Ignacio Mieres.  The Warriors managed to pull ahead just before half-time, with a successful penalty kick from Duncan Weir.

Mieres again missed penalties at the start of the second half, but his second failed attempt led to Exeter's first try, as it hit the post and was neatly gathered.  Hooker Chris Whitehead claimed the score, with Mieres converting.

Weir nosed Glasgow ahead with another penalty, only to miss two more several minutes later.  Despite the presence of some of the Warriors' capped players like Weir, Moray Low, John Barclay and Graeme Morrison, they couldn't get any more points on the board.

Perhaps spurred on by their very own chief - resplendent in feathered head-dress and beating a tribal drum (who knew Native Americans were so prevalent in Devon?) - Exeter scored another try, this time by replacement James Hanks.  Gareth Steenson converted.  A last minute penalty from Steenson brought the final score to Glasgow Warriors 6 Exeter Chiefs 15.

It wasn't the game or result Glasgow were hoping for, but the players kindly stayed on the pitch after the final whistle to sign autographs and have photos taken with the fans.

It's always an exciting prospect to host Glasgow Warriors at Millbrae, and we wish them and Exeter Chiefs all the best for the new season.

Ayr head coach Kenny Murray talks to the Herald's Neil Drysdale in today's edition about the new season and taking it one game at a time.

The article is currently unavailable online, but a link will be posted here when it does become available.  You can, of course, find the piece under the headline Countdown to the RBS Premiership kick-off: the challenge from the west in the Herald's print version of the sports section.

On Tuesday 4th September Ayr will play Warriors in a training game at Scotstoun. For the last three seasons the professional side has visited Millbrae as part of their preparation and the close relationship between the clubs continues with this visit to Glasgow's west end and the home of the Warriors. Full details of kick-off time will follow. 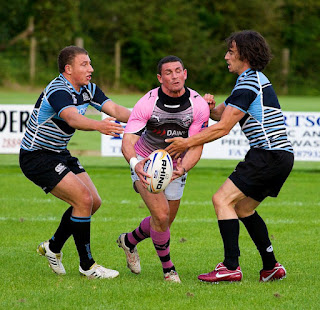