D'arcy and James off to NZ for Junior World Championship

Ayr's dynamic front row duo of D'arcy Rae and James Malcolm will be on their way to New Zealand in June to take part in the IRB Junior World Championship with twenty-six other under-20s players from Scotland.

After a training camp last week, Scotland under-20s head coach Sean Lineen has announced his squad for the tournament and Ayr's youngsters have been named alongside former team-mate Gavin Lowe, who now plays for Glasgow Hawks and is an EDP alongside Rae at Glasgow Warriors.

We wish them all the best for the tournament.

Ayr RFC first XV player Robbie Fergusson has recently been diagnosed with a type of haematological cancer called a lymphoma, which is most likely to be Hodgkin's lymphoma.

Robbie will start his treatment of chemotherapy this week and will miss the next season, although it should be understood that a positive outcome should follow and he will hopefully return to play thereafter.

Everyone at Millbrae wishes Robbie all the very best for his treatment and recovery and the club will provide whatever support possible to him and his family.

It was a beautiful day at Dalziel RFC in Motherwell as Ayr Ladies squared up to Broughton in the RBS Bowl Final.  An enthusiastic crowd had gathered in the sun and they were treated to a tough and determined display from both sides as they tusselled to take home the silverware.

It was the Edinburgh side who got off to the better start, touching down for an unconverted try within the first five minutes.  But Ayr Ladies were undeterred and slowly moved play up the park, with some assured work at the line-out from hooker Amy McGillivray and flanker Claire McGill getting them into an attacking position.

Broughton, however, showed incredibly tough defence, as they did all day, and managed to get a turnover as Ayr were going for the line.  The pink ladies, though, somehow got possession back, much to the delight of their devoted supporters, who were yelling their hearts out.

An accidental offside led to a Broughton scrum but a huge shove from the Ayr front row of Louise Mclauchlan, McGillivray and Gemma Swankie put them under pressure and soon the ball was in the hands of Ayr full-back Ann-Marie Connelly, who made off on a nicely angled run.

An infringement from Broughton gave Ayr a penalty and a charge from Swankie pushed Ayr to the try-line.  Some good handling moved things closer and it was scrum-half Niamh Durnan who spotted a gap in the defence and danced her way through for a try.  Winger Emily Irving easily converted.  5-7.

Ayr had their tails up and centre Laura Turner shot off up the wing.  However, errors at the scrum gave Broughton the advantage and they were making inroads in the attack.  Some strong play from the likes of second rows Ashleigh Nelson and Ruth Barclay-Paterson and back row Laura Sommerville saw Ayr turn over but Broughton later intercepted, only for Turner to track down their speedy back and put in a crucial tackle.

Irving showed a few of her trademark swirving runs but had to go off and her loss was keenly felt by Ayr.  They stayed strong in the defence but Broughton's centre sliced her way through and flew in at the corner for an unconverted try.  10-7.

There was an absolute clatter at the restart between Ayr number eight Lisa Croniken and her Broughton counterpart but the youngster got to her feet unscathed and continued to displayed extremely tough skills in attack as well as defence.

Turner again showed great attacking play, handing off a Broughton defender to make a break.  Daryl Paterson, Phoebe McDowall and Laura McTaggart also made some effective charges.  But there were no further pushes for the try-line as Broughton kept them pinned in their own half before the interval.

The second half was a war of attrition and there were several stoppages for the physio teams to scurry on to attend to crumpled bodies.  As well Irving leaving the field, Mclauchlan, McGillivray and McGill all had to hobble off at various points, demonstrating just how difficult this game was.

Ayr were again trapped in their own half but Broughton repeatedly knocked on.  However, Ayr couldn't capitalise and were under pressure at their own scrum for most of the half.  They were also penalised in a kickable position but Broughton's stand-off missed the kick at goal.

They didn't panic though and again used the line-out to their advantage, this time replacement Lynda Morgan proving a safe pair of hands in the air.  Fellow substitute Kirstin Daly threw herself into tackles throughout the day and the remainder of the bench, Megan Thomson, Sarah Smith, Lyndsay Dick, Zoe Montgomerie and Lisa Main, made valuable contributions to get Ayr out of their own half with ten minutes to go.

Broughton's handling errors were proving their downfall as they fumbled a clearance kick from McTaggart but their strong scrum was again too much for Ayr.  However, Ayr's marauding forwards again turned over and a penalty on their own twenty-two saw them charging for the try-line.  But disappointment was to follow as Broughton's scrum-half flew on to the pass and raced away to score a converted try under the posts.  17-7.

Time was running out but Ayr weren't about to wilt in the Motherwell sunshine.  With Broughton again on the attack, Paterson turned on her heel and charged off to put in what was surely a try-saving tackle.

Another fumble from Broughton didn't matter as the referee blew for full-time and gave the Edinburgh side a well-deserved victory.  However, Ayr Ladies held their heads high knowing that they gave it their all and did themselves and their club proud.  They have made an indelible mark on Scottish women's rugby in their very first season and will be the ones to watch next year.

Ayr front row duo D'arcy Rae and James Malcolm have been named in the Scotland under-20s squad in preparation for the IRB Junior World Cup, which takes place in New Zealand in June.

D'arcy and James both played in the under-20s Six Nations this year and will attend the first of three training camps at Murrayfield next week along with thirty other young Scots. 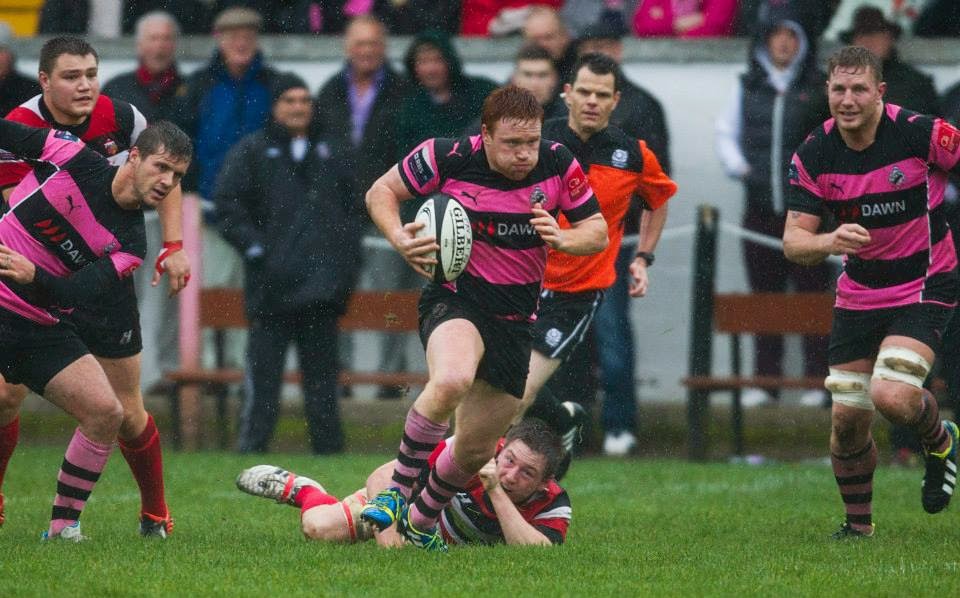 Murray was previously an Elite Development player with the Warriors and was on a part-time training contract with them this season but will now make the step-up to full-time professional with the Glasgow side.

In the wake of the departure of Chris Cusiter to Sale, it's a great chance for Murray to compete for the scrum-half role alongside Niko Matawalu and Henry Pyrgos.

Muzz has been in great form for Ayr all season and richly deserves this opportunity.

Ayr Ladies will be playing the RBS Bowl final against Broughton on Saturday 19th April at Motherwell and would appreciate as much support as possible in what is the biggest game in their short history.

These fixtures were hugely popular last year and the players look forward to putting on a show in what will be two close games.

The first game kicks off at 6pm with the second at 7.30pm.

PJ off to GHA 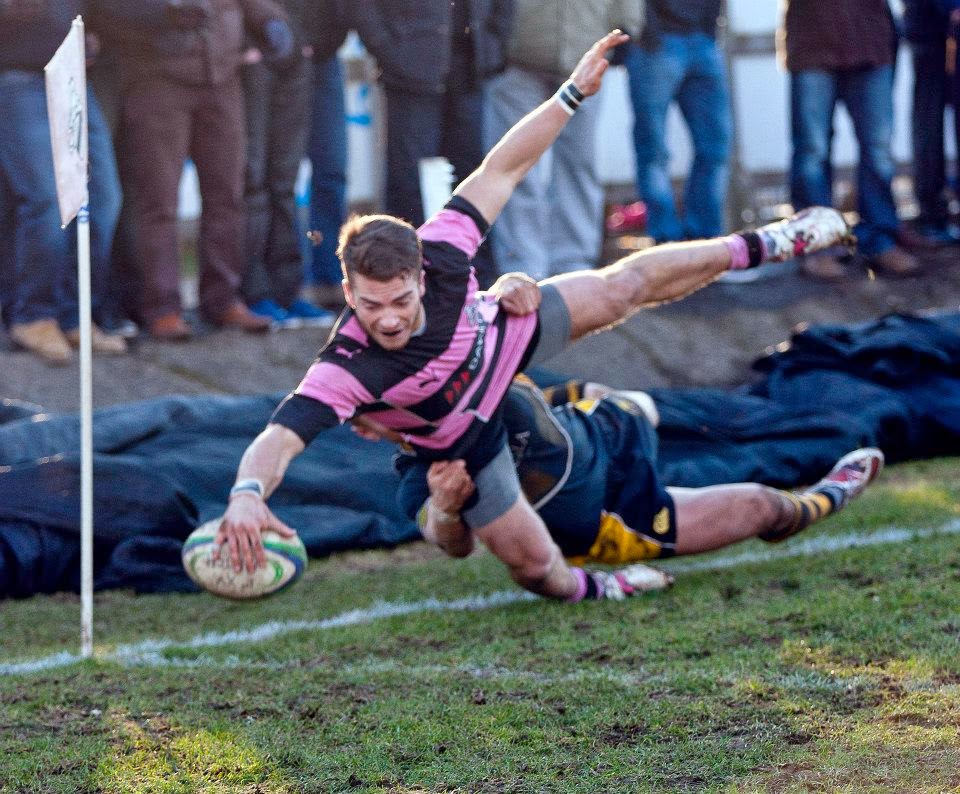 Last Saturday's win over Hawick marked the departure of not one but two Peters.  Not only was it the last game in charge for head coach Peter Laverie, but it was also the final time scrum-half Peter Jericevich ran out in a pink and black shirt, in a fifteens game anyway.

After two seasons with Ayr RFC, he is moving on to GHA to be player-coach and hopefully further his career ambitions of becoming a professional coach.

Although looking forward to pastures new (or old, as he previously played for GHA), Peter has really enjoyed his time at Millbrae.

"Ayr is a great club with great people and support.  I moved to Ayr in the summer of 2012 for a new challenge and it was great to win the league and cup double in my first season, whilst also being part of the first team to have their name engraved on the Bill McLaren Shield."

As well as winning trophies in the Ayr colours, he also made several appearances in the dark blue.

"I won my seventh Scotland Sevens cap and achieved four Scotland Club XV caps over my two seasons at Ayr, so I am very thankful to everyone who has helped me during my time at the club.  It is a good squad to be part of with a lot of talent and strong characters, but I feel it is the right decision to move on and progress with my coaching."

Peter will certainly be missed by the Millbrae faithful who always delighted in his tenacious defensive efforts and fleetness of foot, which saw him score many an exciting try.  He will hopefully get one final outing for Ayr on Saturday 12th April at the Greenyards.

"I hope to be involved at the Melrose Sevens.  It would be great to end my short but successful time at Ayr with some more silverware."

We wish Peter all the best for his new role at GHA.