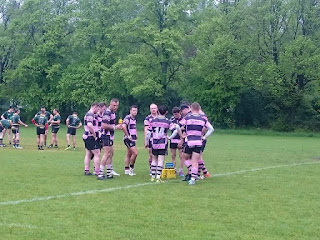 Ayr reached the semi-finals of the cup competition at Glasgow City 7s on Saturday, with the Ayr-Wellington U18s making the final of their tournament.

Tynedale RFC, from Northumberland, beat Ayr 29-15 before going on to win the cup final against Marr.

The U18s were beaten by St Aloysius College in their final after putting in a stylish display in earlier wins over Cartha QP and GHA. 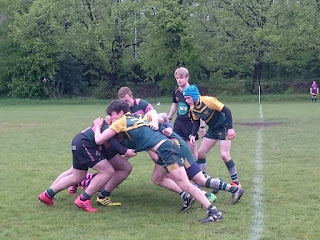 Despite the heavy rain in the early afternoon, the senior side also managed two good wins, beating Cartha QP 24-5 and Dumbreck (a late replacement for West of Scotland) 57-0.

Ayr at the Glasgow City 7s 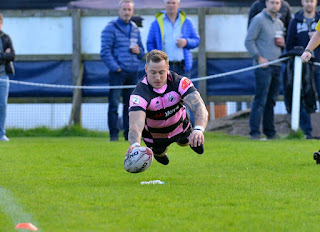 Ayr make the short trip to Dumbreck tomorrow to take part in the Glasgow City 7s.

They have drawn West of Scotland in the first round of the tournament, kicking off at 1.20pm at the home of Cartha QP RFC.

Other teams taking part include London Scottish and Marr, as well as the hosts. 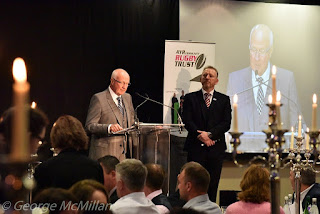 The Ayr Long Lunch in aid of the Bill McLaren Foundation and Ayr Community Rugby Trust at Ayr Racecourse was a resounding success on Friday.

600 guests enjoyed a delicious three-course lunch in the Ayrshire Suite, with former Scotland captain Andy Nicol leading proceedings before his fellow international legend Doddie Weir conducted the raffle and auction, with some wonderful prizes bought for a worthy cause.

The Bill McLaren Foundation supports and promotes the values of rugby throughout the world, carrying on the work its namesake started as a PE teacher and coach in Hawick many years ago. Bill's daughter Linda Lawson addressed the guests, telling them about her father's life and work and showing some classic rugby clips featuring Bill's inimitable commentary. 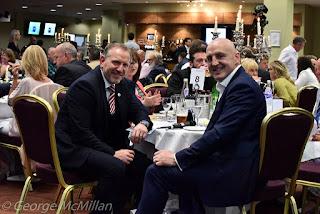 Former Scotland cap and Glasgow Warriors coach Sean Lineen and current Warrior Corey Flynn talked about the upcoming Lions tour, and there was entertainment from singer Cole Page, who had everyone on their feet and a few reluctant (and some not so reluctant) participants in duets.

Keith Wood finished the afternoon by sharing some memories of his time with the Lions and his playing career with Munster, Harlequins and Ireland, of which he was an iconic leader.

Neil Howie of Ayr Community Rugby Trust told the assembled company of their work throughout South Ayrshire, not only supporting Ayr RFC, Marr RFC and Carrick RFC, but taking the sport out into the community and using rugby to help give young people confidence and skills they can use in school and beyond.

Stuart Fenwick, the trust's head development officer, thanked all those who contributed to and supported its rugby programmes throughout the year and all the guests at the lunch who were so generous. 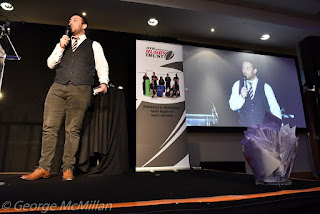 Ayr and Ayr Ladies at the Perthshire 7s 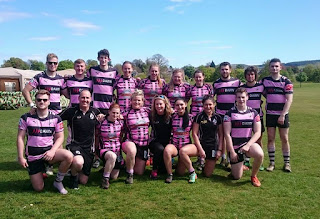 Ayr's men's and women's teams took part in the Perthshire 7s on Saturday at a very sunny Inch Park in the historic city of Perth.

Ayr Ladies competed in a round robin competition with Broughton, Peterhead and Perthshire, winning three games and scoring tries galore.

Laura Turner, Catherine Shennan, Lauren McBride, Connie Griffiths, Claire Law and Sarah Braidwood were on the score sheet multiple times throughout the day, with Shennan and Law adding the conversions.

Some of the youngsters in Ayr's men's squad were given the chance to shine, with Ayr-Wellington U18s' Seth Rae making his senior debut, and they reached the quarter-finals of their competition.

Zac Howard, Ross Hay, James Pinkerton, Blair Cooper, Ali Hazel and Kyle Wood were the try-scorers, with each attempting to convert their own scores.


Ayr and Ayr Ladies are pictured above with coach Gordon Kotze and physio Jessica Alexander.
Posted by Ayr Rugby Club at 11:26 No comments: 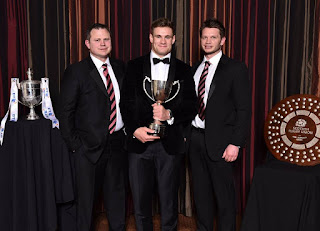 Ayr RFC toasted a wonderful season at Ayr Racecourse on Friday evening, and handed out an array of awards to some very deserving men and women.

After a sumptuous three-course meal and a tribute to the club by Ayr RFC legend Norrie Lymburn, who came out of retirement to speak at the dinner, coaches from all the sections of the club awarded the accolades to their players before everyone danced the night away to the tunes of DJ Stefan Janik.

Scooping the top award of the evening was George Hunter, who was named 1st XV player of the year.

George returned to the stage to pay tribute to Will Bordill, the flanker having played his last match for Ayr as he moves to London for work commitments. He was presented with cufflinks from his team-mates with 46 engraved on them, the number of times he played for the club in his three seasons at Millbrae. 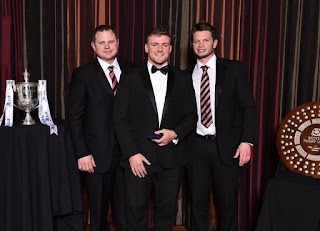 Will scored ten tries in a pink and black shirt and made up a formidable back row with Blair Macpherson and Pete McCallum, and will be sincerely missed by all at Millbrae.

Grant Anderson was called upon to present Ross Curle with a framed gallery of some of his most memorable moments playing for Ayr in the last eight years as the centre contemplates retirement. The door remains opens to Ross, with fans hoping he will be dancing back through it next season. 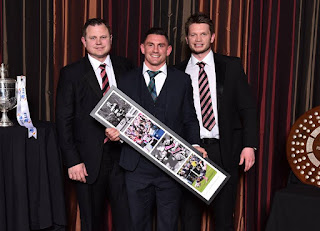 Director of rugby Jim Lymburn presented Craig Stevenson with the inspiration award. The 21-year-old received a liver transplant nine years ago and battled back to health, going on to captain Ayr U18s and making his 1st XV debut last season.

Catherine Shennan was named Ayr Ladies player of the year, with Tony Hall the Millbrae RFC player of the year. Awards were also presented to Ayr 2nd XV and Ayr-Wellington U16 and U18 boys, with coaches having struggled to pick just a few players to receive prizes in a season that has seen each and every player from every section contribute the club's success. 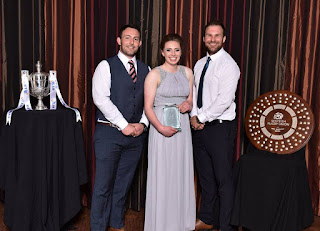 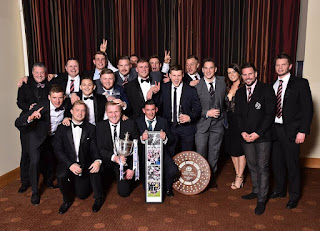 Photos courtesy of George McMillan.
Posted by Ayr Rugby Club at 12:11 No comments: