Everyone at Ayr RFC is saddened to learn of the death of former club president Tom Inglis last week.

Tom's funeral will take place on Friday 25th November. There will be a service at Helensburgh Parish Church at 10.45am, followed by a cremation at Cardross Crematorium at 12.15pm (for family only), and thereafter to Helensburgh Golf Club.

Our thoughts are with Tom's family and friends.
Posted by Ayr Rugby Club at 14:00 No comments: 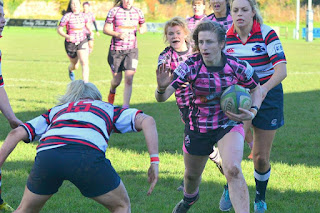 The home side will be targeting another win after a hard-fought victory over Stirling County last month and are looking forward to getting back into action following a few weeks' break.

The two teams know each other well, and Ayr will be ready for their tough opponents from the south side of Glasgow.

The ladies in pink and black are bolstered by the return from injury of Eilidh Thomson and Sammie Morrison, both of whom are on the bench in anticipation of what will be their first match in a very long time, over a year in Thomson's case.

Last Saturday evening saw the 10th annual Oval Ball in aid of the Ayr Community Rugby Trust at Ayr Racecourse, and trustee Neil Howie was delighted with yet another successful event.

'On behalf of Ayr Community Rugby Trust, I would like to thank all those who attended the Oval Ball last week. Your support is greatly appreciated.

'My special thanks go to Glen Tippett and our principal speaker, development officer Stuart Fenwick, for outlining the good work the trust does in the community with youth rugby development in South Ayrshire.

'Stuart introduced his team of Frazier Climo, Catherine Shennan, Paddy Dewhirst, Tony Hall, Connie Griffiths and Harry Lynch, and I would like to thank each and every one of them for their efforts on behalf of the trust.

'The ball was a great success and raised £11,000. A significant part of that came from the auction and my sincere thanks go to Norrie Lymburn for conducting it in his unique and persuasive manner.

'My thanks go again to everyone who attended for your invaluable support and we hope to see you all at next year's Oval Ball.'
Posted by Ayr Rugby Club at 12:59 No comments:

Ali on the bench for Scotland 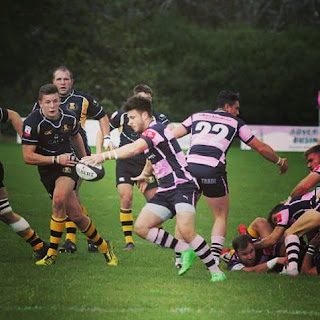 Scrum-half Ali Price has been named on the bench for Scotland for their autumn international against Australia on Saturday.

The 23-year-old joined Ayr last season before signing a full-time contract with Glasgow Warriors, and could gain his first international cap at the weekend.

Also amongst the substitutes is prop Gordon Reid, who could win his 19th cap for Scotland. Stand-off Finn Russell starts, gaining his 20th cap.

We wish Ali, Gordy, Finn and team-mates the best of luck!
Posted by Ayr Rugby Club at 13:01 No comments:

Ayr put in another dominant display to dispatch Heriot's at Millbrae and go into the three-week autumn break in a strong position in the BT Premiership.

Early on, the home team managed to turn defence into attack after the visitors' harrying backs launched themselves out of their own half. Quick thinking from the likes of centre Archie Russell and scrum-half David Armstrong snuffed out any attack and Ayr were back in possession.

Heriot's penalty count didn't help them and from a slick Ayr line-out - hooker David Young and second rows Robert McAlpine and Scott Sutherland were spot on - Armstrong fired the ball to winger Craig Gossman and he sailed away for the opening try. Stand-off Frazier Climo converted with ease. 7-0.

The visitors got into attacking mode again, but Climo, captain Pete McCallum, prop George Hunter and flanker Will Bordill had them swiftly contained.

A few kicks from hand by both sides didn't go to plan and Ayr centre Ross Curle found himself under one such effort; he collected, kicked and chased but to no avail.

Heriot's full-back Glenn Bryce was a menacing presence but he couldn't get through Ayr prop Steven Longwell. His front row team-mate Michael Liness next had a go, bursting up the wing, but didn't have the gas to get near the line.

Ayr's scrum was in commanding form, and both sets of forwards did well on the slippery surface.

The Millbrae men pushed on up the park through Bordill and Climo, and when they gained a penalty, Curle took it quickly and pounced over the line. Climo converted. 14-0.

Climo had an excellent day with the boot and soon added a penalty. 17-0.

A seventeen-point lead may look good on paper, but Heriot's were bound to come back, with their abundance of class and sophistication.

Bryce was the danger man again, appearing in mid-field, but Armstrong just got a hand to him and brought him down. The ball went loose, McCallum scooped it up and Climo kicked it out of harm's way.

It was brute force that got the visitors their score in the end, Liness driving over after a couple of line-outs. Stand-off Alex Hagart converted. 17-7.

There was tension between the teams and Armstrong received some unwanted attention from replacement George Turner, causing referee Lloyd Linton to give both a stern talking-to.

Ayr stretched their lead just before half-time with another Climo penalty. 20-7.

The home side turned up the power at the second half, flanker Blair Macpherson knocking Heriot's defenders out of his path like a bowling ball through skittles.

When Heriot's did have possession in the third quarter, they lacked urgency and Ayr turned over, full-back Grant Anderson more often than not getting his hands on the ball and muscling his way through flailing defenders.

Another good Ayr line-out from a penalty allowed Climo to perfectly time a pass to Curle, who stepped through a gap and cruised over for this second try. Climo converted. 27-7.

Heriot's were determined to get through the pink and black wall, and despite tackles by Longwell, replacement Craig Stevenson and Gossman, centre John Semple got their second try, with Hagart converting. 27-14.

Curle landed himself in the sin bin after a tackle on Semple, but Ayr stuck into defence and didn't leak any points during the ten minutes.

Another penalty by Climo after a high tackle on Gossman brought the final points of the game. 30-14.

But it wasn't over. Ayr brought on all their replacements in the last quarter, with a reshuffle in the forwards that saw Lewis Anderson scrum down at number eight. With Heriot's somehow short on a front row player for a period, scrums were uncontested until another prop appeared.

It didn't help them that their replacement Clarke Smith was yellow-carded for repeated infringements but Ayr couldn't take advantage.

They searched for the bonus-point try, but never found it. Still, when the final whistle went, Ayr were satisfied with another commanding performance that leaves them just a point behind league leaders Melrose. 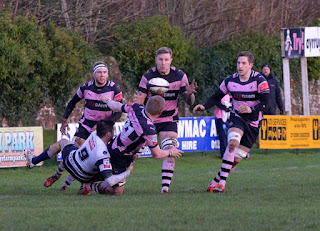 It's the penultimate home game of the calendar year at Millbrae on Saturday as Ayr welcome Heriot's in the BT Premiership, kicking off at 3pm.

After two weeks of away games, Ayr will be glad of home comforts as they take on the much improved Goldenacre side who have overcome a shaky start to their assault on the league to scramble to fourth place in the table.

Ayr head coach Calum Forrester has been keeping an eye on the Edinburgh side's recent results.

"Heriot's have hit their form over the last month, coming into this match off the back of four consecutive wins."

But Ayr are buoyed by a tenacious win against Currie last Saturday.

"We (the coaching team) were pleased with the reaction from our players last week," said Forrester. "and we know that we will need to raise our performance again in order to get a result this weekend."

There is only one change to the starting line-up, with Blair Macpherson moving up from the bench to the blindside flanker spot.

Adam Prentice and Cameron Taylor return to the squad, taking their place amongst the substitutes.

With this the only fixture in November and just one more to follow at Millbrae in 2016 (Ayr v Hawick on Saturday 10th December), fans will be out in force, as they have been all season.

Ayr 2nd XV v Heriot's 2nd XV kicks off at 2pm at Rozelle. You can follow the scores via the Ultimate Rugby app.
Posted by Ayr Rugby Club at 10:00 1 comment: 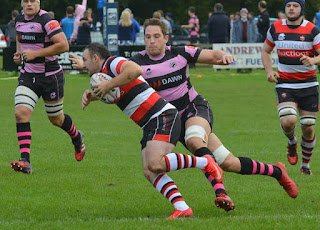 Blair Macpherson has been voted the October 2016 player of the month, securing 25% of the online vote.

The speedy back row has scored eight tries in the last ten games. He was previously player of the month in August/September 2014.

The October player of the month poll is now open!

Last month's was jointly awarded to flanker Gregor Henry and scrum-half David Armstrong. Who wins the £50 Slaters Menswear voucher is up to the public vote as always.

The poll closes on Thursday at 12pm, with the winner announced shortly after.

Vote here.
Posted by Ayr Rugby Club at 11:52 No comments: