Alas, after a long off-season competitive rugby is upon us once more.

The 1XV kick off their 2018/19 season tomorrow with an away trip to Edinburgh Accies. Newly promoted Accies will be out to prove a point in front of a home crowd at Raeburn Place and have promised Premiership fans to expect a fast and expansive style of play.

Ayr will take confidence from a very strong preseason where they dusted off GHA, Marr and Hull Ionians- scoring 159 points in the process.

Danny McCluskey captains the side with Pete McCallum sidelined through injury. Millbrae new-boys Ollie Smith and Kyle Rowe start at 13 and 14 with some familiar faces completing the rest of the back line.
In the pack Ruairidh Sayce picks up his first start for the 1XV as a reward for some very strong preseason performances. Lee Scott makes his Ayr return after a few seasons riddled with injury and is joined in the engine room by Forsoc Scottish Rugby Academy Stage Three player Marshall Sykes. David Corbenici earns his competitive debut at six with Spinks and Macpherson completing the back-row.
On the bench former Millbrae-boy James Malcolm is released from Warriors for the weekend and Dutch Internationalist Amir Rademaker could make his debut if brought on.

The 2XV are also in action tomorrow away to Hamilton in the National 1 reserve league. A youthful side, they will benefit from the experience of Craig Gossman who leads from full-back. New boys Alfie North, Alan Ferrie and Wolf Van Dijk start at 4, 5 and 7, respectively.

If you can't make the trip to Edinburgh or Hamilton and don't fancy fighting the crowds at the Air Show Millbrae host Uddingston at Millbrae in what looks to be a close encounter.

On Sunday action continues when Ayr Ladies look to get back-to-back league wins as they travel to Howe of Fife.

Lewis Anderson has signed with Hong Kong Scottish ahead of the 2018/19 season and will depart Millbrae. 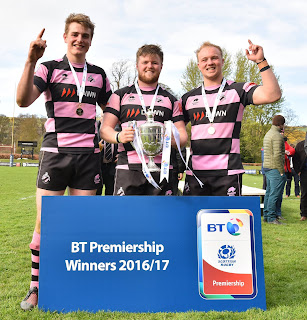 The Ayrshire boy who honed his craft at Marr RFC earned his 50th appearance in the pink and black in the BT Premiership Final against Melrose in May.

Lewis was also an integral cog in the 2016/17 BT Premiership winning side.

All at Ayr RFC wish him the best of luck in Hong Kong.

It was 'Derby Day' on Saturday when Ayr 1s, 2s and U18s travelled to Fullarton Park to take on neighbours Marr Rugby. 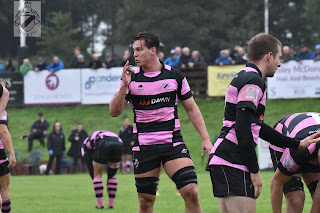 The 18s got the action underway at midday. On the main pitch Ayr A were humbled by a rampant Marr A side who cruised to a 24-0 victory in front of a home crowd. On the back pitches Ayr 18s found redemption when their Bs battled back from a 22-7 half time deficit to seal a 22-27 victory with seconds to spare.

At 14.00 it was the turn of the 2nd XV. Ayr centre Zac Howard broke clear to touch down within the opening minute to set the tone of the match- from then on, it became light work for the Millbrae men. Further tries from Harry Warr, Finn Bark, Craig Miller, Wolf Van Dijk, Logan Richardson, Grant Hutton, Harry Lynch and James Baird contributed to a 7-59 beating of Marr's newly-promoted reserves.

The main event got underway at 15.30 and although just a 'friendly' the people of Ayrshire came out in their droves to show their allegiance.-A sea of purple and gold was interrupted by a bold baby pink.

Ayr's intensity was on full display straight from the opening kick-off. Multiple bullish carries within the opening minutes put them inside Marr's 22 before speedster Ollie Smith darted in from out wide. The tricky touchline conversion skewed just wide of the posts.

On the ten minute mark Ayr doubled the score when Scott Lyle charged down a clearance kick. He managed to reclaim the ball and use his attacking prowess to glide through the scrambling defence.

Ayr's third came minutes later. Millbrae new boy David Corbenici punched through the line before feeding the supporting Ruairidh Sayce. The front rower looked for the try line before offloading to David Armstrong who breezed in under the posts. Lyle converted to make it 0-17 in just thirteen minutes.

Marr were able to grab one back when their number eight bundled over from a rolling maul.

As the game moved into it's second quarter Scott Lyle managed to break into the home sides 22. He found Craig Gossman outside him who pinned his ears back and dotted down in the corner. Gossman wasn't done yet however and just ten minutes later doubled his tally with another blitzing run up the touchline.

Just before half time Marshall Sykes- who's ball carrying was at the heart of all that went right in the first half- was rewarded with a try of his own. Craig Gossman danced along the touchline to get Ayr within arms length of the line before the second rower powered over.

With a comfortable lead at the break you would suspect Ayr may begin to slow down, but as the second 40 began they somehow found another gear. Fluid attack from Ayr found Grant Anderson out wide who strode home within the first thirty seconds of the restart.

On the 48th minute Frazier Climo, who had a try controversially chalked off in the first half, showed his illusiveness as he ghosted through three tackles and ran in from halfway. He converted his own try to make it 7-50.

The sustained pressure on Marr was proving to much and on 56 minutes a weak clearance fell into the hands of a striding Grant Anderson. He fooled his opposing number with a crafty show 'n' go before feeding Paddy Dewhirst on his outside. The youngster sprinted in to add to the already emphatic lead.

The next try came from another Ayr newbie. Gloucester Academy product Alfie North showed his power by carrying over the line, without regard to the three straggling tacklers trying to pull him down.

As the game descended into its' closing stages Ayr showed no sign in letting up. A crafty half-break from Harry Warr once more put Marr on the back foot. Warr was brought down but a offload out the back door fell in the hands of Kyle Rowe who showed no signs of being caught. Jack Rennie converted.

The final score of the day came from Jamie Bova. Ayr impressively swung the ball from side-to-side, keeping it alive in the face of what was stiff defence from a Marr side playing for pride. It eventually landed in the hands of Bova who managed to drive through a recovering tackle and into the corner.

After the final whistle head coach Pete Murchie was delighted with his team's performance, stating: "We started off with real intent and got into our attacking shape really well. Our contact was also really sharp- we were pretty brutal at the breakdown...

"A pleasing thing for me was all of our players who came off the bench and our young players who made a real impact. There was a number of guys playing their first game of the season and for the club who played really well.

"There is a lot of people putting their hands up for selection".

Next week the first XV are back in preseason action when they travel down south to take on Hull Ioanians. As always you can follow the action every step of the way on Twitter @OfficialAyrRFC.