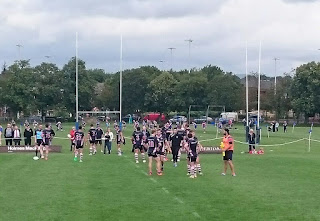 Ayr got their 2015/16 BT Premiership campaign off to a flying start with a bonus point win against Glasgow Hawks at Old Anniesland on Saturday afternoon.

It's been five months since the end of last season and despite a tough and competitive pre-season, there was some rust on show from both teams early on, with handling errors aplenty.

There was a blow for the visitors as new captain Ross Curle left the field injured with barely ten minutes on the clock, his absence forcing a re-jigging of the backs, with Danny McCluskey taking Curle's inside centre berth, scrum-half David Armstrong moving to fly-half and Ali Price making his debut for Ayr at nine.

The reshuffle didn't seem to cause too much upset and after some steady work at the set pieces, Ayr made inroads into Hawks' half.  Full-back Grant Anderson took a quick tap-and-go to shoot off with second rows Robert McAlpine and Scott Sutherland, McCluskey and debutante Archie Russell in support.

Some toing and froing with penalties and line-outs and turnovers followed before Ayr regained possession and Haddon McPherson, turning out for Ayr for the first time and against his old club, flew up the wing for a superb try.  Anderson missed the tricky conversion.  0-5.

Things can get heated between these two old west coast rivals but, some shirt-pulling aside, the match was conducted in a good-natured manner.  There were, however, several penalties given away by both teams and Hawks' young scrum-half George Horne stepped up to the tee to take advantage of Ayr's infringements.  He unfortunately missed, but a few moments later knocked over a drop goal to make up for it.  3-5.

Hawks forayed into Ayr's half but hefty tackles from new prop Steven Longwell and winger Cameron Taylor prevented them from getting anywhere near the line.  Some slips and stray balls allowed the home team to make their most dangerous move up the wing only to be thwarted by a flying tackle from McPherson.

The game got messier still with more knocks-on and penalties, and Hawks found the scrum a challenge.  A solid take at the line-out from Sutherland let Ayr trundle to Hawks' line and Longwell rumbled over for a try to cap a very fine first appearance in a pink and black shirt.  McCluskey couldn't make the conversion.  3-10.

Hawks continued to struggle at the set pieces, but Ayr's line-out held firm, with number eight Blair Macpherson this time bundling over for try number three.  It was Armstrong's turn to have a go at the conversion, but his kick was just short.  3-15.

Anderson went back to the kicking tee and got a penalty before half-time.  3-18.

The second half began with errors from both teams, but Ayr flanker Graham Fisken tidied things up and used his strength to barge his way into Hawks' half.  They were determined to get back into the game and possession regained, they were firing about with real intent.  It came to nothing, as Armstrong was on hand to fell their attackers.

Flanker Andrew Dunlop spotted a great opportunity as the ball bobbled out of a Hawks ruck and he scooped it up to release McCluskey.  The youngster made some metres but the ball went loose.

McCluskey popped up on the wing again but this time to snuff out Hawks' speedsters Robert Beattie and Erland Oag.

Ayr settled into a period of real pressure in Hawks' half with Armstrong mere metres from the try-line.  They were helped by Horne being sent to the sin bin but their hard work was for nothing as Hawks turned over.  They couldn't clear and were later pinged for a deliberate knock-on.  Ayr took the line-out and Macpherson appeared on the wing for the bonus point try, which Anderson converted.  3-25.

The scoreline may have flattered to deceive as Hawks were industrious throughout the afternoon, but sadly couldn't get anywhere near Ayr's try-line.

Putting in the hard graft too were Ayr's front row, with Longwell and Javan Sebastian looking sharp along with hooker James Malcolm, before he was replaced by Fergus Scott.  Nineteen-year-old prop Sam Kenny came on for Sebastian, marking a good afternoon for Ayr's new players.

All the substitutes made a positive impact, with Kerr Gossman the last of the bench on to the pitch.  Back rower Peter McCallum quickly got himself involved after some fancy handling from Price and Sutherland and fast feet from McAlpine and Anderson.

Armstrong and Russell got stuck in too but the game seemed to be slowing to a conclusion before McCallum slammed the ball over the line.  The referee thought it was held up but after a quick chat with his assistant, the try was awarded.  Anderson converted.  3-32.

Macpherson and McCallum were on the prowl again but time ran out and the final whistle was blown to bring to an end a productive and encouraging afternoon for Ayr. 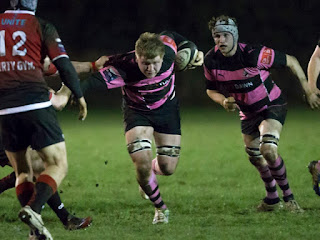 Ayr get their BT Premiership campaign underway on Saturday with a mouthwatering match against west coast rivals Glasgow Hawks at Old Anniesland at the earlier time of 1.15pm.

Clashes between these old foes are always full of drama and tension but Ayr head coach Calum Forrester is positive his men are ready for everything Hawks will throw at them.

'Our players are up for the challenge as they are desperate to get back into competitive action following a tough pre-season.'

But nothing can be taken for granted at Old Anniesland.

'Hawks had the best defensive record in the league last year, and they will be even tougher to break down now that Gary Mercer has been brought in as joint head coach.'

The match will mark the debut of several new Millbrae men, with props Steven Longwell and Javan Sebastian joining a very familiar looking pack of forwards.

In the backs, Archie Russell partners captain Ross Curle at centre, and winger Haddon McPherson starts against his old club.  Scrum-half Ali Price and prop Sam Kenny could make their first appearances from the bench.

Lowe on form for Falcons

Gavin Lowe made his debut for Newcastle Falcons on Saturday in the Singha Premiership 7s, with his team beating Worcester Warriors 40-12.

Lowe lined up with several of his Scotland 7s team-mates and scored four tries to help the Falcons remain unbeaten in the group stages.

Ayr players off to Canada with Warriors

Glasgow Warriors jetted off for Nova Scotia this morning for their exciting match against Canada on Saturday in Halifax, and there are several Millbrae men in the squad.

Will Bordill, D'arcy Rae, Pat MacArthur and George Hunter have been named in the forwards, while Robbie Fergusson is in the backs.

The game will be live on BBC Alba at 7pm on Saturday and we wish all the Warriors the best of luck!

Glasgow Warriors take on Clermont Auvergne tomorrow, and there are a few familiar faces in the squad for the pre-season friendly.

The match in France kicks off at 6pm local time/7pm UK time, but isn't televised.  Read the full story from Glasgow Warriors here.

Former Millbrae man Gordon Reid will be busy too on Saturday, as he has been named amongst the replacements for Scotland's match against Ireland.

Ayr's Jack Preston, Lee Scott, Lewis Anderson and Sam Graham were part of the Glasgow & the West U20 side that posted a victory against their Borders & East Lothian counterparts last weekend, and the regional fixtures continue this weekend.

With Ayr taking on Falkirk and West of Scotland at Sunnyside (first match kicking off at 3.50pm) on Saturday, it's going to be a busy couple of days.  Good luck to everyone playing this weekend!

It was lights, camera, action at Millbrae last night as STV arrived to film their advert for the Rugby World Cup.

The crew have been all over Scotland to get snippets for the TV ad, which will hit our screens in a few weeks, and it was Ayr's turn in the evening sun.

The youth section, Ayr Ladies and the senior men all featured and we can't wait to see the finished result.

A new competition will be staged from September to November this year, featuring seven schools in the county.  The South Ayrshire Schools Conference will see boys' teams from S1, S2 and U16s and U15s girls' teams competing week-in, week-out for the chance to make it to the Finals Night at Millbrae.

With rugby already firmly established at Marr College and Carrick Academy, SASC aims to promote and encourage the sport at Girvan, Belmont, Ayr, Kyle, Queen Margaret and Prestwick, with Carrick fielding a girls' team.  It is hoped that U18 girls' teams will play when possible.

Points will be awarded in the boys' competition for wins, draws and losses.  In the girls' competition, each school will host a festival, with points awarded for wins, draws and losses in the round robin format, as well as the number of players each school brings to the fixtures.  Boys' and girls' points will contribute to school totals, with separate totals for the girls' teams.

It is certainly an exciting time for rugby with the World Cup coming up and it is hoped that lots of boys and girls will be encouraged to lace up their boots and get involved in the South Ayrshire Schools Conference.
Posted by Ayr Rugby Club at 13:16 No comments: