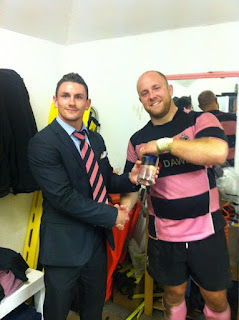 ﻿
Man-of-the-match Nick Cox (right) with Ross Curle
﻿
It was a tense first half at Millbrae, as Ayr tusselled with Stirling County to maintain their unbeaten record in this season's Premiership. It wasn't simply sporting hyperbole when Ayr's head coach Kenny Murray said taking on County would be a "massive challenge".  Stirling meant business, but Ayr would not be denied.

The visitors opened the scoring at two minutes, with a penalty kick from centre Brian Archibald.  Two minutes later, Ayr got a chance to reply, but scrum-half Peter Jericevich couldn't slot the ball between the posts.  0-3.

That didn't dampen the spirits of the packed stand and touchline or the home side, as captain Calum Forrester led from the front, crawling along the Millbrae turf at one point when Stirling's determined defence brought him to his knees.

It was Forrester who got Ayr on the score board at seven minutes, sneeking in from the base of a scrum to score his third try of the season.  Jericevich missed the tricky touchline conversion to keep the scores at 5-3.

The next fifteen minutes saw both teams make forays into the other's half, with Ayr matching Stirling's speedy backline.  However, County aren't just flashy backs and their forwards posed many questions.  Ayr answered well at the set pieces, the line-out in particular.

The home forwards and backs combined on more than one occasion to make for the line, with the ball flying through the hands of fly-half Sylvain Diez, hooker Hayden Wisnewski, second rows Scott Sutherland and Colin White and number eight Forrester, but to no avail.

Ayr, though, managed to extend their lead to 8-3 after Jericevich kicked a difficult penalty that hit the post but still went over.  Three minutes later, centre Robbie Fergusson displayed some great running to get Ayr's second try.  Jericevich missed the conversion.  13-3.

County were hot on Ayr's heels, however, with prop Garry Mountford bowling over for the visitors' first try.  Archibald converted, his unusual golfing-esque technique standing up to the attempted charge-down from Jericevich.  13-10.

Stirling were bouyed and their backs were sniffing out interceptions.  After one near-miss, winger Matt Lamb was on to a flat pass and hared off for the line.  Archibald added the extras.  13-17.  Just before half-time, the centre had another chance to get more points for County, but missed the penalty.

It wasn't looking good for the home side as the second half began, with Sutherland getting a ticking-off from referee Lloyd Linton.  Archibald again had a shot at goal but missed.  Stirling pressed on, but Ayr bolstered their defence and managed to get a crucial turn-over on their own line.

County continued to show creativity in attack, with full-back Jonnie Hope chipping and chasing only for his pass to find no-one.  Things went downhill for them, as second row Craig Deacons was sin-binned at nine minutes for cynical play.

Ayr took their chances, with Nick Cox tearing around the pitch like the proverbial bull in a china shop.  Centre Richard Dalgleish was fearless in tackling as Stirling tried to force their way back into a game that was now slipping away from them.

Their frustration was more than evident when the ball was churlishly thrown off the pitch as Ayr were about to take a line-out.  Eventually succeeding at the delayed set piece, after Stirling got a slap on the wrists from the officials, Ayr put in a huge effort to drive Cox over the line for try number three.  Jericevich converted to help Ayr take the lead, 20-17 at fifty-seven minutes.

Ayr's backs took every opportunity to show off their skills, with winger Craig Gossman taking a great high ball, motoring off up the touch line and kicking ahead, only to be taken - the crowd thought - too late.  Fergusson and Dalgleish's centre partnership continues to grow, as their stylish play unleased full-back Grant Anderson.  He couldn't make it to the line, as Stirling's defence stayed strong.

The home crowd didn't have long to wait for another score, as Cox got his second and Ayr's fourth try of the match, the jovial prop diving over the line.  Jericevich's missed conversion took the scores to 25-17 with twenty minutes to go.

With a four-try bonus point under their belt, Ayr could have settled into protecting their lead for the remainder of the match, but took the line of attack being the best form of defence.  Anderson and Craig Gossman linked up but found no way through.  Kerr Gossman's mazy running made some inroads but County were holding their ground.

Jericevich, socks ever at his ankles, swiped the ball from the back of an Ayr scrum in Stirling's half, before racing off, kicking ahead and forcing the visitors into touch.  The resulting line-out led to flanker Graham Fisken charging for the line and getting the fifth try of the afternoon for the men in pink and black.

Jericevich's conversion attempt was delayed as County's flanker Adam de St Croix was helped from the field by both sets of medical teams with a very painful-looking arm injury, an indication of Stirling's never-say-die attitude.

Jericevich slotted the kick to make it 32-17.  Changes were made as fan favourite Denford Mutamangira took his place in the front row, and seventeen-year-old centre Gavin Lowe made his senior debut.

Stirling tried to come back, with a good run from Lamb, but they got themselves in a fankle and knocked on.  With the minutes ticking down, Craig Gossman did what he had been threatening to do all afternoon and ran in a superb try from his own half.  Jericevich's conversion made the score 39-17.

Stirling's misery was compounded by a final minute yellow card for full-back Hope.  But it was celebrations all round for Ayr as the whistle was blown for full-time.  Four matches played, four matches won.

Man-of-the-match was Nick Cox for his two tries and all-round herculian efforts.