After months of intricate planning the 2018 Land O'Burns Weekender has finally passed and once again proved to be a roaring success. Emulating the buzz of it's maiden year twelve months ago, the weekender fused together beach rugby, a beer festival, creative cuisines, family entertainment and world-class live music into an unforgettable two-day event. 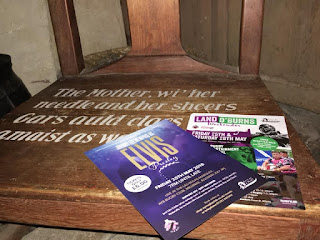 Kicking-off early on the Friday (25/05/18) the action got underway at 5pm with the U-13s tournament taking place. It proved to be a showcase of tomorrow's superstars and in the end the home side, Ayr, came out on top.

The minis' tournament was by followed by the trade touch competition which pitted some of Ayrshire's local businesses against each other out on our man-made beach. Competing was: Courtney Plant, Donnini Apartments, Coorie Nook, Marine Fitness and Shady Tour. After some fiercely competitive group stages it was Coorie Nook who prevailed, dusting off Courtney Plant in the final. Donnini Apartments try-bonus gifted them third,completeing the podium. 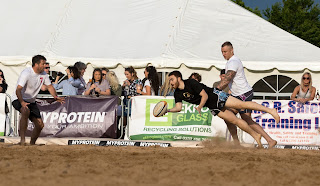 Music from the talent DJ Stefan Janik pitch side generated an forgettable festival atmosphere whilst 'Just Like Eddie' wowed spectators on the Designer Studios Stage. The action was followed by the Friday's main event at nine with Jonny Lee Memphis as the iconic Elvis Presley.

The festivities continued into the Saturday where our beach rugby tournament ran in tandem with the Land O'Burns Beer Festival from midday-20:00. A real exhibition of some of the countries finest rugby talents, Newton Stewart snatched up the gold in the mens tournament whilst Hillhead Jordanhill made it back-to-back weekender victories. After the beer festival came to a close at eight local band the Marauders took us into the early hours of the night. 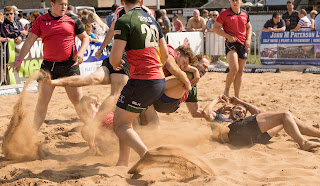 From all at Ayr RFC we thank the hard work from volunteers and sponsors a like who made this festival the best one yet. Lastly, thank you to all who came down this weekend, it was a fine example of the local community getting behind a great cause and we are sure there was some fun had along the way- same time next year?