Ayr made it two-from-two on Saturday when they downed Currie Chieftains 30-17 in front of a bumper crowd at Millbrae on Ladies Day. 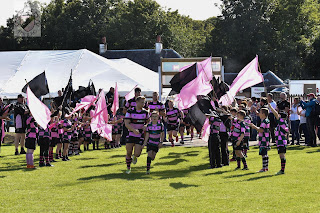 Currie were out for revenge after Ayr snatched victory from the jaws of defeat in last year's BT Premiership semi-final- battling back from 21-3 down to win 21-23. They threatened from the first whistle to the last but it was Ayr's physicality that held out in a war of attrition.

Ayr kicked-off proceedings with a dream start much to the delight of the home crowd. Glasgow Warrior Paddy Kelly was able to shrug off his opposing number after just three minutes and charge to the line with no regard for the scrambling defence. Climo added the extras to make it 7-0.

Chieftains weren't deterred by this and managed to retaliate with a score of their own moments later. The bruising Thomas Gordon latched onto a faulty line-out and drove close to the line. On the following phase Fraser Watt managed to burrow over from close range. The conversion levelled the scoring.

Chieftains took the lead just briefly in the contest. A Gregor Hunter penalty on the 33rd minute saw the visitors on the front foot but a Kyle Rowe try on the stroke of half time ended their seven and only minutes in front. Armstrong spotted space and darted clear before feeding Kyle Rowe on an inside line.

Ayr started the second half in the same vein as the first, this time scoring after four minutes. David Corbenici, in his first run-out at Millbrae, carved through an illusive defence and in for the score. The conversion slipped just wide giving Ayr a 22-10 lead.

The visitors had been enjoying the lions share of possession throughout all of the fixture but Ayr were able to absorb the pressure and make good use of limited possession. Powerful carries from Tommy Spinks and Blair Macpherson were puncturing Chieftains' line and creating space for the backs to flourish. 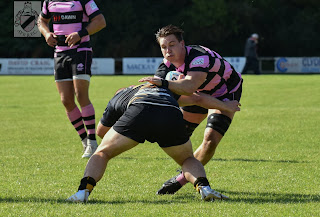 Currie still looked dangerous with ball in hand but were hit with a sucker punch on the hour mark. After looking almost certain to score and scrape back the deficit Ayr countered and soon Paddy Kelly was in for his second. Grant Anderson darted clear up the touchline and found the supporting Kelly on his inside shoulder. With twenty to play Currie now trailed by 17 points, the largest margin of the game.

A Currie try from the restart gave the travelling fans something to cheer about and almost forced a grandstand finale but a Frazier Climo penalty chalked off any hope of a losing bonus point.

In a game that was won upfront and at scrum time prop Steven Longwell was named Slaters Menswear man of the match.

It was also a successful day at the office for Ayr's 2xv who routed Marr 77-19. Scott Lyle was named man of the match after grabbing four tries and putting in an expert display from the boot.