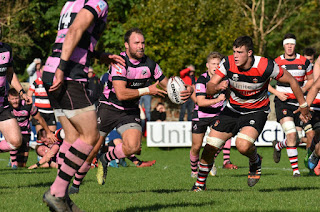 Ayr retained the Cairdeas Quaich in a dramatic, exciting match against Stirling County in the BT Premiership at Millbrae on Saturday.

The sun was shining, the beer was flowing for Oktoberfest and there was a great atmosphere for both sets of players to compete in.

It was the visitors who got on the board first. After full-back Jonny Hope missed a kick at goal, teenage winger Logan Trotter raced away for a try between the posts, which Hope converted. 0-7.

There was a long delay as Ayr second row Robert McAlpine was attended to by both medical teams and left the pitch. He was replaced by Gregor Henry, himself a late addition to the squad.

Ayr had their hands full with the lively County team but they were level-pegging in attack, winger Craig Gossman leading the charge, with centres Stafford McDowall and Danny McCluskey buzzing about the park all afternoon too.

The men in pink and black have an extremely mobile front row, and props George Hunter and Steven Longwell were involved in the run-up to the Ayr's first try, the former blasting through the County defence and the latter flipping the ball to winger Scott Lyle, who scurried over. The conversion was right on the touchline but Lyle made it look easy. 7-7.

The big story had been the return of three former Ayr players to Millbrae in County colours, but that tale never left the page to materialise on the pitch. Gossman the elder caused his brother Kerr - in his first season at Stirling after a spell at Glasgow Hawks last year - to spill the ball but their paths never crossed again during the match. More of Messrs Curle and Jericevich later.

Ayr lost Longwell to injury, with Robbie Smith moving to prop to make way at hooker for Lewis Anderson. 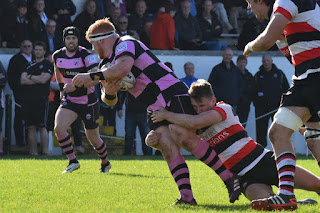 The home backs were gelling well, with the back row of George Stokes, Blair Macpherson and Pete McCallum injecting energy into the proceedings too. Fly-half Frazier Climo muscled over for a second try for the Millbrae men. It was another conversion attempt from the touchline and Lyle got this one too. 14-7.

McCluskey broke away in mid-field but was abruptly halted by a high tackle by Stirling County's Ross Curle. From the penalty line-out, Hunter sped off, with McDowall, Climo and that industrious back row of Ayr's making light work of the County defence until Lyle lined up another kick - a penalty this time - and nailed it. 17-7.

There was little to separate the two teams in the set pieces, and chips and high balls were employed by both to gain territory and try and spark some creative attack. Lyle was involved in both, his chipped kick bobbling past Curle nicely, and then he was under a high one from the ensuing County line-out, and managed to get it away to his team-mates as black, red and white shirts engulfed him.

The crowd took exception to the off-the-ball man-handling of scrum-half Harry Warr and this sparked the usual squaring up and shoving, but the refereeing team calmed the situation and Ayr got a penalty. A series of scrums followed, rather taking the zip out of the game until McCallum marched for the line only to be held up.

A couple of scrums later and Macpherson got the ball down for the try, with Lyle adding the extras. 24-7.

The second half began with a few comings and goings. Robbie Nairn made his Ayr debut, replacing Gossman on the wing. Joining Gossman on the sidelines for ten minutes was Hunter, who was shown a yellow card along with County prop Remy Chies for an unknown misdemeanour. Henry followed for a professional foul, meaning it was thirteen against fourteen for a few minutes.

Ayr were spirited in defence, but they couldn't catch Hope, who scored a try and converted it. 24-14. 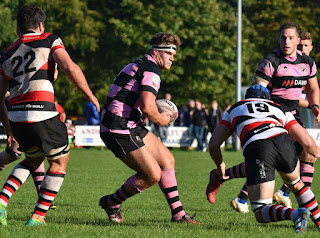 Hope was the main man for Stirling. With Curle looking harassed, largely thanks to Ayr full-back Grant Anderson, it was Hope's dancing feet that did the damage. Not long after his first try and conversion, he got his second. 24-21.

Smith had run himself ragged, and the robust front rower took his leave to be replaced by David Young as Ayr fans started to get nervous with just Lyle's earlier penalty separating the two sides.

County were looking to clear their lines but they didn't see the 6'3" Nairn looming down on their little half-backs. He charged down the kick, spun round, picked up the ball and bulldozed his way to the try-line for a score that got the Millbrae faithful on their feet. Lyle's conversion looked like it was going over but it hit the upright. 29-21.

Curle managed to shake off the attentions of Anderson long enough to release Kerr Gossman, who flew up the touchline for an almost certain try had it not been for a perfectly-timed tackle by McCluskey that propelled Gossman off the pitch before he could ground the ball.

It was Ayr's turn to charge up the wing, but it was second row Michael Badenhorst - like Henry and Young, a late addition to the match day squad - who took off before popping the ball to Lyle, with the winger getting his brace. He converted his try too. 36-21.

After a busy afternoon, Stokes took his leave, with Paddy Dewhirst coming on and the reshuffle of backs becoming forwards causing uncontested scrums.

Ayr were caught napping, and Peter Jericevich - a former Ayr scrum-half playing at fly-half for County - whizzed over for a try that Hope converted. 36-28. 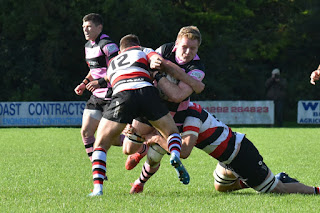 There was still so much more to come from this match. McCluskey hit the ball like a train, with Lyle backing him up and flying into County defenders and Nairn in on the act too. But it was the quick thinking of Warr that got Ayr their sixth try of the day. Not waiting for anyone or anything, he picked up the ball and bounced over for a cheeky try. Lyle couldn't convert. 41-28.

Ayr's youngsters and new boys were having a great day, not so much Curle, who found himself completely flattened by his former centre partner McDowall.

The 19-year-old centre was soon powering up the wing like a man possessed, using all his bulk to escape the defenders and, like Warr, scoring his first try in an Ayr shirt. It went unconverted. 46-28.

McDowall was back in the thick of things with Nairn and Lewis Anderson but he was tackled in a dangerous fashion by Curle, who was lucky not to land himself in the sin bin for his recklessness.

Instead, it was Climo who, moments later, was yellow-carded for kicking the ball away after a great burst by Dewhirst came to nothing.

County got the final score, scrum-half Ruairidh Swan nipping in for an unconverted try. 46-33.

With a few minutes left on the clock, Ayr still had the energy and enthusiasm to go looking for more points, McCallum showing guile and leadership not to let County snaffle away possession. Lewis Anderson and Lyle were on the look-out but the final whistle went before they could get near the try-line again.


In the 2nd XV match, Ayr beat Stirling County 28-24. Ayr flew into the lead but County came back in the second half, getting themselves a one-point lead with eight minutes to go. But Jamie Bova's try sealed the victory for Ayr. James Pinkerton, Adam Paxton and Lewis Young also scored tries, with Matt Davidson converting one and adding two penalties to see them to the win in the BT National Reserve 1. Cameron Reece was the man of the match.
- Elena Hogarth.
Posted by Ayr Rugby Club at 14:53