It wasn't the most glamorous year on the pitch for Ayr RFC but through grit, determination and a steely resolve that has made the club famous, they have found themselves on the verge of league glory once more.

From staring death in the eye two weeks ago at Currie Ayr mustered up one of the biggest 40 minutes in their history to erase an 18-point deficit and tomorrow look to become back-to-back BT Premiership Champions. 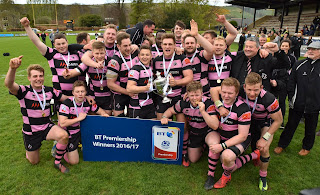 Familiar surroundings, Ayr travel to the Greenyards to face table-toppers Melrose in a carbon copy of last years final. Calum Forrester's men will take great confidence in their league triumph there a year ago and also in their victory in January- when they ended Melrose's 12-game winning streak.

Whatever the result it is set to be an emotional day with it being George Hunter, Scott Sutherland and Head Coach Calum Forrester's last game. We thank them all for the passion and success they have brought to the club during their tenor.

Lewis Anderson starts at hooker to win his 50th cap for the club, with Blair Macpherson starting at eight for injured skipper Peter McCallum- Grant Anderson picks up the captaincy.

In the backs Stafford McDowall returns from his spell with Scotland U-20s and replaces the injured Frazier Climo.

Rory Hughes is released by the Glasgow Warriors and starts on the wing.

There is still spaces available in our second supporters bus travelling to the Greenyards, which will be stopping off in Cartha for any fans in Glasgow. Contact the bar on 01292 441944 to book your spot.