Another fantastic season of rugby over the last ten months culminated in the 2018 Awards dinner on Friday night.

Held within the familiar surroundings of Ayr Racecourse rugby excellence was celebrated from all of those who have donned pink, black and green this campaign.

The U-18 boys awards followed with Mathew Field and Dale Molenaar winning hardest trainers. Andy Morrison picked up Most Improved and Olly Mossie was celebrated by his teammates, who selected him as Players' Player of the Year. Club Captain Harry Lynch lead by example all campaign and was awarded Player of the Year.

It has been a troublesome season so far for Millbrae but with four games still to play they are starting to build some serious momentum, catapulting themselves to league safety. Lee White picked up their only award of the night- Player of the Year.

Before the 1st XV awards a special thanks was made to departing players Scott Sutherland and George Hunter, along with Head Coach Calum Forrester. All three men have been paramount in the club's success over the last decade and will be thoroughly missed around Millbrae. Club physio Helen Reid also received a bouquet of flowers, as she leaves the club on maternity leave. 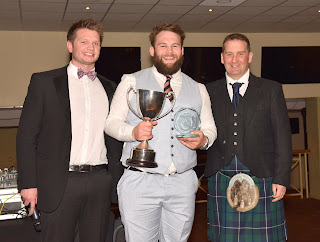